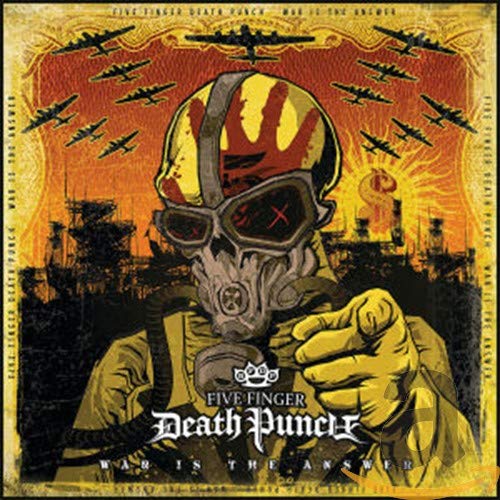 After a couple of years making very little headway, questionably named Los Angeles metal outfit Five Finger Death Punch seem to be becoming overnight sensations on the metal scene. The European release of their debut The Way of The Fist has been followed very quickly by their second album War Is The Answer and a co-headlining tour of the UK with Shadows Fall.

Appreciably heavier than the first album, at their lowest point FFDP a sub-par mash-up of Slipknot, Machine Head and Disturbed, but at their best that combination becomes Pantera and Black Label Society, with perhaps more hardcore-styled vocals in some parts (the title track, for example), for some truly monumental riffs. First single Hard To See is poor metal-radio fodder, but the destructive Bulletproof is a stand-out and the varied instrumental Canto 34 takes in everything from thick, heavy riffs to acoustic melodies to electric solos, and really shows off the ability of guitarists Zoltan Bathory and Alice Cooper‘s Jason Hook, who replaces Darrell Roberts.

There are more good tracks here than bad, and the good are very good, so it’s well worth putting the slight stigma surrounding them (angsty band for young fans) aside and give the disc a listen. It’s surprisingly good on the whole.

Two short years seems to be all it has taken for Phase Reverse to get from their formation to their first full-length album, playing live constantly in the meantime and recording their self-titled...